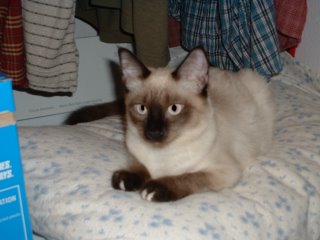 Her royal catness has granted permission to post an image of a cat other than herself. This is Gracie, looking very much like a seal-point Siamese, though her heritage is unknown. Gracie lives with one of my co-workers, and is reportedly as much of a nudnik as DJ.

With each mouse infraction,
She will spring to action;
She's the mighty huntress of our world!