My church recently completed its Stewardship Campaign. This is the time of year when people tell the church how much money they plan to give the church during the following year. Each year, the church’s finance committee tries something new. This year, the committee sent a little booklet with a story loosely based on the Jonah story. It was written and illustrated by Meredith, who is married to the Associate:

But Jonah went that way, with all his stuff.

Jonah found himself surrounded by Sell Fish.
They consumed his stuff faster
than he could pay it off. 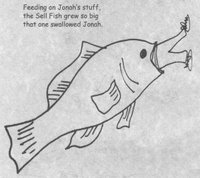 Feeding on Jonah's stuff,
the Sell Fish grew so big
that one swallowed Jonah.

But God saved Jonah
and brought him to [our church].

And Jonah sailed God's way
with the Spirit.

God's Gifts Are Immense!
(they can't fit into this world)
[Long list of God's gifts, some particular to our community]

How glad I am not be stuck
inside my own little bowl
stufficating
among the Sell Fish.

I can't give God little pinches
of leftover stuff.

Be a Stewardship PRO
and give in PROportion
to your blessings
in a real world
with a real GOD
on a real Steward Ship.

Now, since I use Jonah as my nom de blog, this naturally caught my eye. Additionally, it got me to thinking of my understanding of the original story.

I started calling myself Jonah because I often feel like I'm living in the "belly of the beast". The beast, in this instance, is American consumer culture. Which makes my usage very similar to Meredith's re-telling.

But the Biblical Jonah's time in the "great fish" is something different. I've told the story before, but I'm happy to re-tell it yet again.

The Book of Jonah is included with the minor prophets, but it begins much as the Book of Job does: "Now, there was a man..." Both books might as well begin "Once upon a time."

The Lord tells Jonah to prophesy to Nineveh, whose wickness is well known. Jonah agrees that the Ninevites are pretty bad folk, but he knows that if they repent, the Lord will spare them. The Lord is just kind-hearted that way.

And he doesn't want the Lord to spare Nineveh. He'd rather see it fry. So, he catches the first boat going the opposite direction.

The Lord isn't going to let him off that easy, and sends a mighty storm to delay the boats. Before long, the captain and crew make the connection between the dour prophet and the storm, and throw the prophet overboard.

In the normal course of things, Jonah would have drowned. But the Lord sends a "great fish", which swallows Jonah. Jonah sucks it up and prays to the Lord, and ultimately agrees to go prophesy to Nineveh.

He gives them the full fire and brimstone treatment, like Billy Graham in his glory days. And sure enough, we're told the ruler of the kingdom rends his robe, and puts on sack cloth and ashes. In those days, if the ruler did it, the remainder of the kingdom followed.

And sure enough, the Lord spares Ninevah - just as Jonah expected. Jonah pretty pissed, because he was really looking forward to witnessing some hard-core smiting. So, he goes off and sulks under a tamarask tree.

Initially, it's comfortable under that tree. It's nice and shady. But then the sun comes out and dries up the fruit that has been providing the shade. So now Jonah hot and sulking.

The Lord asks Jonah why he mourns for the tree. "After all, you didn't have anything to do with creating it. Yet, you chide me for sparing Nineveh, which I did create."

The great fish in the original story plays, at worst, a neutral role. It is far from negative, for if the fish had not swallowed Jonah, the prophet would have drowned. One could argue the fish plays a very positive role, in fact.

Maybe there's more to Stewardship, just like there was more to that fish. Maybe Stewardship is more than money.

Now, I understand some emphasis must be given to money. The gas and electric companies aren't going to donate their services to the church. Roofers won't fix the roof for free. Additionally, like many Episcopal Churches, our church currently has a deficit. So - as long as we live in an economy which uses money as a vehicle of trade, the church will need money.

By asking people to make commitment of time and talent, as well as treasure, the church honors those gifts equally. The current system implies that the church honors our money alone.
Posted by Jonah at 3:42 PM