Sunday evening, as my friends and I were celebrating my semi-centennial, I kept repeating two phrases:Dr. Omed made it, and gifted me with the whale now pictured above (and larger, with Jonah inside, with part four). We agreed that folk who knew me when I was 20-something would have bet against my making it this far.

So, number one, I'm thankful to be alive. 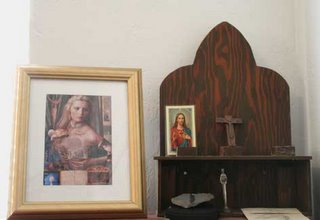 Dr Omed gifted me with a wealth of other stuff, too, which he describes in detail here. Pictured on the left is an altar space incorporting two of his gifts. The large framed goddess is titled "Mom & Apple Pie", and is one of Dr Omed's collages. In front of the altar is a fossilized fern - see Omed's note for the details. I made the altar in church camp, in '67 (or thereabouts). The crucifix comes from around the same time. The Sacred Heart prayer card was bought a few years ago - after I decided this image represents a wedding of anima & animus (i.e., feminine & masculine). The little silver statue is St. Francis, and was bought when I was a teen. The paper to the right of Francis is from Padre's funeral.

The altar is on top of a book shelf filled with philosophical and religious books.

What I mean to say is I'm thankful for Dr. Omed. He's stuck with me through thick and thin. We've lost touch, now & again, but always reconnect where we left off. To have someone in my life who has known me this long is a true gift.

I'm thankful for Brother Dave & Linda. I'm thankful Bro Dave & I have taken the risk to re-invigorate our relationship. His unconditional affection and support emanate through e-mail, all the way from southwest Texas.

I'm thankful for the friends who made it Sunday night, and for the folk they represented who couldn't make it. Most people were from my church, several were from the folk music club, and one was from both. A couple of co-workers were there in spirit. A splendid time, etc.

I'm thankful to Hugh, who reminded me - first blog this morning - how important music is. He thanks "Betty" (I gather this is his name for the divine) for different folk he's seen in concert. I have a fairly healthy list, too. The one artist he & I share is Joni Mitchell, who opened some poetic and emotional doors for me.

I'm thankful to Meg and Sam, who have indulged my flirtations. They are very different women, but the voices I hear when I read their blogs are very attactive. Meg is a ringer for Janene Garafalo, who I heart. Sam bears a remarkable resemblence to my cousin Robin.

Thankful to Spidey, and the crew in the RLP chat room. I've found a new community there. It doesn't supplant the community I have with folk I can see and touch; it complements it.

There's several others in the blogosphere I would mention, but I want to finish this entry before I go to Thanksgiving Day service. I do not mean to slight you; I'm in a hurry, and lazy.

I'm thankful for my voice, singing and writing. These are gifts I strive to honor and share to the best of my ability.

I look out my study window. The sky is clear blue, the temp is probably in the high 60s. The trees having their fall fireworks dance.

Unless someone at church "adopts" me, I don't have a place to go for the traditional meal. I'm a little sad about that. But the day is not so much about meals as it is about being mindful of our giftedness, and some consideration for the source of those gifts.

Finally, I'm also thankful for you, "gentle reader". You keep coming back inspite of my self-indulgences, and occasional lack of discipline, and persistent lack of focus. Your comments (though rare), and presence in my stats, reassure me I'm not just muttering to myself.