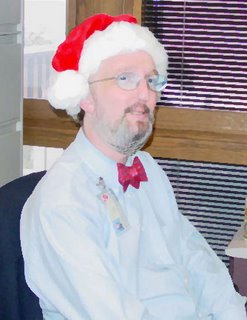 Tomorrow's entry in A Light Blazes in the Darkness (a collection of Advent meditations by the RevGalPals) compares and contrasts Santa Claus with John the Baptist.

They both wear unique garb - Santa's heavy red coat, John's robe of animal hair. They both have curious diets; milk & cookies for the former, and locusts and honey for the latter.   Finally, they are interested in problems of good and evil; Santa calls it naughty and nice, while John calls it righteousness versus hypocrisy.

Now, this series of comparisons is based on the popular image of Santa.   The church remembers a man today (Dec. 6), Nicholas of Myra, who was the original of Santa Claus.   Nicholas was bishop of Myra, and reports suggest he was no more concerned about drawing up lists of who was naughty and nice than John the Baptizer.

You probably already know that the folk tradition shortened Nicholas' name to "Claus", and that "Saint Nicholas" became "Santa Claus" – a tradition brought to America by the Dutch.   This little bit of trivia is even brought up in the holiday classic Miracle on 34th Street.

As this article in Wikipedia relates, Nicholas lived through an exciting era in Christian history – from the persecutions prior to Constantine, to the Nicene Council.

Nicholas left no writings.   We know he spoke strongly against Arianism at the Council of Nicaea , but we don't know his exact words.   All we know are folk tales, the best known being that he provided dowries for three impoverished maidens in his town.   This charity, and similar charitable acts attributed to him, have caused him to be associated with gift-giving.

Gifts are given on his feast day (December 6, formerly the feast of the goddess Artemis/Diana).   And this, in turn, has caused him to be associated with gift-giving at Christmas.

Many traditions associated with Nicholas are also associated with older, so-called "pagan", gods.   One who rides over houses distributing gifts is called Wodan (or Odin) in Germanic countries. Related to this is a recent controversy regarding Christmas trees. Some businesses and muncipalities are referring to these as "Holiday" trees, perhaps as a form of "political correctness" or in hopes of avoiding the sort of First Amendment law suits that have been popular in the past few years.

I fail to understand why this is such a controversy. This type of tree is not native to Israel, nor is there any mention of a Christmas tree in any of the Nativity narratives.

Again, the Wikipedia article makes clear the tradition was appropriated from pagan ritual (Greek, Roman, and Norse). I would think those who oppose the celebration of Halloween (as a pagan holiday) would support the effort to disassociate this "pagan" emblem from a Christian holiday.

So, why not call it a Holiday Tree? Why not allow this symbol to represent the yearnings for all devoted people of good will, regardless of their religious beliefs - or lack thereof? Who is harmed?

I heard the most amusing "Holiday Tree" on the way home last night. Elementary schools across the state have decorated trees, one of which will be prominently displayed in our state capital's rotunda.

Our state recently began a lottery (aka, "idiot tax") whose proceeds (once there are any) will go toward education. One school used lottery tickets to decorate a tree, to show their appreciation for this funding source.

A state legislator, who had opposed the lottery, found this to be offensive, and wrote a letter to the school's principal. The tree has been withdrawn from the competion and removed from the rotunda.
Posted by Jonah at 11:42 AM