...I am not a Buddhist. And the Buddha would not have minded this in the least. He would have been happy to hear it. He was not, himself, a Buddhist. He was the thing itself: an enlightened being. Just as Jesus Christ was not a Christian, but a Christ, an enlightened being.
— Alice Walker, "Suffering Too Insignificant for the Majority to See", Shambhala Sun, May 2007, 55.
Posted by Jonah at 9:31 AM 1 comment:

Received via e-mail:
Something quite extraordinary happened at The White House [on Monday, June 25]. It was covered in the news, but barely. The lack of media attention doesn’t diminish the uniqueness of the occurrence however.

Yesterday, the 2007 Presidential Scholars were received and welcomed at the White House. It’s quite a remarkable collection of young adults. Each state, the District of Columbia and Puerto Rico were represented by one male and one female high school senior selected for this honor. It would have been quite a brain trust assembled to be addressed by the President of the United States at the event. But that’s not what was extraordinary.

Although it was not officially part of the ceremony, one of the Presidential Scholars handed George W. Bush a letter. The letter was brief, to the point, and criticized our continued involvement in Bush’s needless war. The letter encouraged him to realize his policies were failing and bring an end to the quagmire he helped create. The letter was signed by the individual who presented it to Bush. The letter was also signed... by every single 2007 Presidential Scholar! George W. Bush paused to read the letter, set it aside, and went on with his pre-scripted speech.

The 2007 Presidential Scholars were there representing blue states and red states. We can only assume some were Democrats, some Independents, and certainly some Republicans. The 100% consensus of the entire group was detailed in the letter to the president. Perhaps it can have some impact in providing George W. Bush with a dose of reality outside of his bubble. If so, we’ll have a group of teenagers, a remarkable group of teenagers, to thank for it.Correction: according to this article, the letter requested that Guantanamo detainees be treated humanely.
Posted by Jonah at 3:10 PM No comments:

Nine of us went to Watonga, in western Oklahoma, to offer a Vacation Bible School. Most of us arrived a little after 6 Tuesday evening. After checking in to our motel, we immediately went to the site where we were offering the VBS in order to get things set up.

A group from our church has been going to Watonga for the past seven years, I've been told, and this is the fourth year I've been involved.

We started setting things up between 6:30 and 7. People worked together very well, and were assertive about asking for help as needed. When it was suggested that we accomplish just one more task before we ate supper, I became assertive. My blood sugar was low, and protein and some carbs were required - stat!

We went out for pizza, which definitely balanced out my blood sugar. As we were eating, the restaurant's TV began running severe weather alerts for the area. A major system seemed to be moving towards us; in fact, we could see extremely black clouds through the restaurant's north-facing windows.

Most of us had finished eating by this point, and returned to the motel, which was just a short walk away.

I decided to sit on the hood of my car and watch the system as long as possible. As I was sitting there, a young man approached and started visiting with me.

The young man appeared to be of Native American heritage. He was in town, it turned out, for the wheat harvest. He was originally from Iowa, but now lives in northwestern Kansas. He follows the harvest circuit from Kansas through Oklahoma to Texas and back north to the Dakotas.

We watched the storm clouds to the north. I saw a lightning flash as we visited. The young man reported that the harvest in the Watonga area was not good - the rains had come too late.

He looked directly ahead, at the ever-darkening clouds. "It's like this," he said, "A couple years ago, I went back to spend Christmas with my family. My dad wanted me to attend Midnight Mass with him. I stopped having any use for church a long time ago, but I agreed to go, in order to please him."

The young man had dark hair that reached to the bottom of his collar. His muscles and upper body made clear he did hard manual labor for a living, but his clothes and appearance were clean.

"After the service, the preacher came up to me and chewed me out for being poorly dressed for the service. I told him, 'Look, I didn't come here for you. I came here to make my dad happy.' My dad was behind me; he was talking about me to all his friends. You could tell from his expression that he was proud of me.

We had never exchanged names. I felt honored that he had shared this personal story with me. He didn't know I was in town for a church-related activity. He probably didn't notice the Episcopal shield – which includes a cross – on my rear window. He trusted me with his story. There was only one true response to the story:

This week's theme suggested by Sally.

Bonus question: Back to the church — what does every member ministry mean to you? Is it truly possible to encourage/ implement?
Although this is not a buzz term I've heard before, I suspect the meaning is similar to "the priesthood of all believers", the phrase sometimes used in my denomination.
Historically, the congregation has looked to the people at the front of the church to serve multiple functions. These specially ordained people have been expected to be many things — administrator, theologian, counselor, cheer leader, etc. They are also expected to be all things to all people. So, the first hurdle to overcome is the notion that a person requires seminary training to minister. Special training may be required for parish adminstration (incidentally, only a recent addition to some seminary curricilla), or for counselling, but there's no reason lay people couldn't serve these functions.
Next, ordained clergy must be willing to delegate and allow lay people to function with limited interference. I have often experienced a situation where a clergy person claims he or she supports lay ministry, and delegates responsibility to a person or group, then promptly reclaim control of the project. Lay people should be allowed to follow the course the Spirit leads them in, so long as it is not contrary to church teaching or polity. The ordained clergy may not always agree with the methods, or even the goals, but must allow the project to succeed or fail with limited interference. This seems to me to absolutely necessary for an effective lay ministry.
Finally, everyone concerned must accept the reality that some in the congregation are simply uninterested in being ministers, or in being recognized as ministers. Some people come to church just to be fed, and have little interest in feeding others in any overt way. I think the reality is that these people may minister by their presence, and many minister through their financial contributions. I am mindful that Jesus appears as the person needing ministry, as well as the person serving as minister. In other words, accepting the help of others can be as much a "ministry" as offering that help.
Posted by Jonah at 9:27 AM 3 comments:

Live the questions now. Perhaps, then, someday far into the future, you will gradually, without even noticing it, live you way into the answer.
— Rainer Maria Rilke
Posted by Jonah at 6:48 AM No comments:

This week's theme suggested by Sally.

sometimes i wonder why it feels like i am the only sunny day i know
anyhow this is america, all the bright day long dogwoods unravel before my eyes
bees like yo-yo trees attack the sun, there are peepers down at the pond
someone wearing black clothes is comforting someone
like a frog quoting scripture near an old rock
when a nation has dirty hands it smears everything it touches
when a nation is up all night it gets cranky
it will feed on anything it can find
including the fears and appetites of the weak
sometimes a president will get out of hand and blame it on the weather
the clouds have exceptional needs, he says
the rainfall is incredibly dangerous
this is one crazy country! a ruffian of unwarranted powers
sometimes it will plant peace into the brains of the people, like yellow roses
other times it will plant you face first into the window box of war
america, just because it is possible to cowboy your big red barn
through the neighbor's living room
that does not mean it is right or proper to do so
when i see you misbehave like this, america
i want to go like walt whitman
i want to roar like angels out of your tonsorial dawnMr. Wallace is the former poet laureate of Suffolk County, NY. You may learn more about him at his MySpace page. I am proud to call him friend, in both the virtual and phenomenal world.
Posted by Jonah at 8:02 AM No comments: 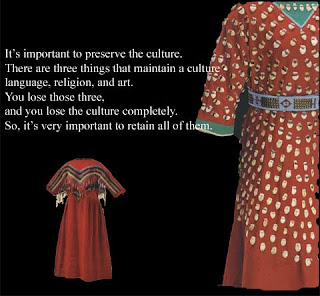 “It's important to preserve the culture. There are three things that maintain a culture — language, religion, and art. You lose those three, and you lose the culture completely. So it's very important to retain all of them.”
— Jackie Parsons (Blackfeet), 2005
Left, dress made in the 19th century. It is made entirely of European trade materials and influenced by Western fashion.
Right, Crow elk tooth dress, ca. 1890

Both the pictures and the text are from a brochure promoting the latest exhibit at the Smithsonian's National Museum of the American Indian. The exhibit is entitled "Identity by Design: Tradition, Change, and Celebration in Native Women's Dresses".

For more information on the exhibit, see the museum's website.
Posted by Jonah at 6:49 AM No comments:

Alice Walker, on why she says she is not a Buddhist, even though she has studied under a number of Buddhist masters:

“The whole point of anything that is really, truly valuable to your soul, and to your own growth, is not to attach to a teacher, but rather to find out what the real deal is in the world itself. You become your own guide. The teachings can help you, but really, we're all here with the opportunity to experience the reality of hereness. We all have that. I trust that.” From the interview titled "We Live in the Best of Times," Shambhala Sun, May 2007, pg 46.

Ms. Walker is best known as the author of the novel The Color Purple; her most recent book is We Are the Ones We have Been Waiting For.
Posted by Jonah at 7:56 AM No comments: