I care not much for a man's religion whose dog and cat are not the better for it.
— Abraham Lincoln

A Boy and his cat 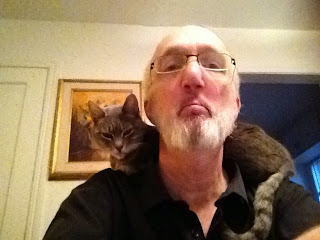 Also known as "DJ on my shoulders"
Posted by Jonah at 7:15 AM No comments:

There are few things in life more heartwarming than to be welcomed by a cat.
— Tay Hohoff

The true miracle is not walking on water or walking in air, but simply walking on this earth.
— Thich Nhat Hanh

Recently finished reading an interview with Tom Robbins by Mara Altman. She asked him if there was anyone in his life he considered a mentor. "No one living," he said; then, went on:

Oh, maybe Leonard Cohen. Leonard Cohen is my hero. He’s like Zorba the Buddha. Bhagwan Shree Rajneesh, the Indian guru ... who later changed his name to Osho, he had this notion of a character called Zorba the Buddha who — we’ll say a man, but it could be a woman too — who was contemplative, led a serene spiritual life, meditated a lot, was a nonviolent, placid person who lived in the spirit but who also knew how to work and make money, knew how to utilize the Internet, knew how much to tip a maître d’ in a Paris nightclub, who was of the world and enjoyed the world and all of its sensual pleasures in terms of food, sex, drink, color, art, but also at the same time was deeply spiritual. And I’ve kind of superimposed that Zorba the Buddha figure onto Leonard Cohen, perhaps unfairly, but he strikes me as someone who is close to that figure. I like the fact that he meditates, that he has spent time alone — a lot of it in anguish in a Buddhist monastery — that he is so adept with language and loves women and wears beautiful Armani suits and will sit and sip wine at a sidewalk café with beautiful girls and yet be able to have this rich inner life, not just creatively but also spiritually.

I remember Dr. Omed once telling me I needed to learn how to be in the world, but not of it. I imagine he meant something like this. Combining, as it were, the exuberance of Kazantzakis' Zorba with the supposed serenity of a Zen master.

Whether Leonard Cohen is that Zen master is another question. He's on the record of saying his interest in Zen was primarily motivated by the teacher, though he's also expressed an admiration for the strict discipline. I imagine he would be amused by Robbins' description, perhaps even flattered. He'd likely find it as amusing as his image as a lady's man.

For myself, it's my hope to live the words I pray. It's a daily struggle to practice the peace I seek. To find the joy in life, even in the darkness. I don't know that I have Zorba's lust for life, or the Zen master's discipline. I'm decidedly no lady's man, nor fashion plate. I'm a middle class guy, with no greater American dream than keeping my head above water while managing my consumer debt. I'm dazzled by things, and tempted by what they promise. I'm easily cut by the side-ways glance, or snide tone. I'm too nervous, too fearful, to wear the world as a loose garment.

Leonard wrote: “I practiced on my sainthood.” I think I know what he meant. My struggle and striving to live with integrity are that practice. It's not sainthood I seek, exactly: it's a spirit that is calm.

I'm no saint. I'm no Zorba. I'm certainly not Zen Master Cohen. I'm only Jac. I might as well begin with a song.

If you are not allowed to laugh in heaven, I do not want to go there.
— Martin Luther

Who thinks that they can kill time without injuring eternity?
— Henry David Thoreau