where the pilgrim's eyes
were opened
Jacob's well

Sunset a door
a thin line
on the horizon

Dreams beyond the beyond
an infinite circle
in the pilgrim's eyes

An ounce of mother is worth a pound of clergy.
— Spanish proverb

Each can do an equal amount of good, or ill.

Finding Humility After a Sacred Walk

St. Jerome, that great holy crank, is often pictured with a lion. The Desert Fathers welcomed cats to their loosely aligned communities. It's likely the cat was useful for reducing vermin, but I think those felines great and small were also prized for another reason: humility. A cat teaches its human companion humility better than any other creature I know.

Living in community can also be humbling. If done with honesty, clear self-assessment, and integrity, it can be a spiritual discipline. Always I find myself balancing my needs against those of others. The goal, on the sacred path, is to put the needs of others first. But this is balanced by recognizing my own needs. For example, my need for alone time with God — just as Jesus would often step away for private prayer.

As an introvert, it's quite challenging to strike that balance. I'm most comfortable alone, with my own thoughts. The delusion of my perceptions, the delusion of self.

This is part of what I brought with me when I went to walk the labyrinth last Saturday at a Quiet Day at St. Paul's.

I had actually been on the fence as to whether to participate. I had, after all, walked the Healing Path just a few months ago. The deciding factor came on Ash Wednesday. No acolytes had been scheduled for the 7:00 p.m. service, so the Eucharistic Ministers were pressed into service. When I arrived — about 10 minutes before service — I was informed that I had been volunteered to carry the Gospel book.

I don't think I've ever carried the Gospel before; if I have, it was when I was a teenager, over forty years ago. Carrying the Gospel involves bearing it in procession — both at the beginning & end of the service — and holding it for the deacon as s/he reads from it. The Gospel book used at St. Paul's Cathedral is oversized — about as big as the average coffee-table book — and bound by an engraved metal cover. It's surprisingly heavy.

The Gospel expresses an ideal of human living. The life story of Jesus is a plumb line, against which the faithful measure their own manner of living. It calls the listener to judgment. This is why, in our faith tradition, we stand when the Gospel is read.

A hymn is traditionally sung as the Gospel is brought into the midst of the congregation. The crucifix and a pair of torches proceed the deacon and Gospel. The book is presented to the deacon, who finds her place then hands the book back to the acolyte. The acolyte holds the book as the hymn is sung. On this occasion, the hymn seemed especially long, at least six verses.

I stood there, facing the deacon, as the Book grew increasingly heavy. And I was struck by what an honor it is to carry this particular book. How I so often fall short of the ideal, yet am still worthy to hold and carry it in religious ceremony. It was a prayerful moment.

That feeling of prayer was a thin place; a moment when I was aware of the divine. I longed to return to that place, and knew the labyrinth was a way to enter a similar thin place. 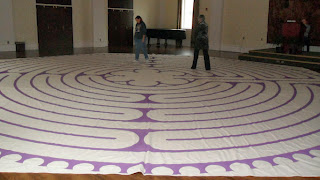 I was one of the last ones to enter the labyrinth Saturday morning. I was taking my time. I was praying an Anglican rosary, using a prayer a friend had shared on Facebook: “Keep darkness out, keep light within; keep fear without, keep peace within; keep hatred without, keep love within.” I was two-thirds through the rosary when I noticed I was among the last pilgrims, and decided to complete the rosary as I walked the labyrinth's circuits.

As I've said before, one often meets the companions one needs on the Path. On this day, the first person I met was John, a Viet Nam vet who, I believe, suffers from PTSD. I stepped to one side so he could pass; we bowed to each other as he walked by: “The sacred in me recognizes the sacred in you,” to paraphrase the Hindu prayer.

This stepping to one side to let others pass was something I frequently did that day, mostly as a courtesy. It was also a way to honor my sense of personal space — to allow a bit of breathing room between my body and all those other bodies. The lanes were narrow, and only once did I turn to one side to walk the same circuit as another person — who was walking the opposite direction.

In time, I was the last person in the labyrinth. In time, most of the other pilgrims were heading downstairs for lunch. There were three facilitators walking at the edges of the labyrinth to support our prayer with their own. In time, I came to believe people were waiting for me – possibly my fellow pilgrims, certainly those three facilitators. There was also the possibility I'd be late for lunch, and would not know where it was being served. I was very near the entrance; no more than two or three circuits to go. I was at point where I could easily step over one border and enter the lane leading out.

So I did. I walked back to my chair, quickly jotted down a few notes, and put my shoes back on. I started to join the others, but as I walked down the stairs, I was aware the noise was painful. I had to admit I needed a few more minutes to transition from the sacred to the mundane.

I didn't think much one way or the other about my actions. I wasn't consciously thinking, “Man, I'm a really spiritual person. I've spent all this time in prayer, and I've been so considerate of my fellow pilgrims!”

I suppose that element of pride was there though, lurking in my subconscious.

I drove straight from church to the grocery store. It didn't take long to collect and purchase my paltry supplies — no more than 15-20 minutes. Returned to the car, put the bag in the trunk, started the car.

I couldn't pull out because another car was directly behind me. The driver, a woman with a young child, was waiting for a car on the opposite side to pull out. I wasn't really feeling impatient. I was listening to This American Life as my car ran, and was relatively content. I looked in the rear-view every so often to see if the woman had moved yet.

Our interaction became a silent movie, with each of us projecting dark voices (I suppose) onto the other. At some point the woman saw my eyes reflected in my rearview. I didn't think I was looking that often, but perhaps she thought I was getting impatient. She might have in my place, as I had no way of leaving (there was a car parked in front of me).

I don't know why she didn't pull back so I could exit; then she could have pulled into my former parking space. There was no way to communicate that option.

I was aware of her looking back at me, noticing my eyes in the rear view. I tried to think of a way to communicate I was in no hurry. So I drummed my fingers. Mistake — she read that as greater impatience. I could see her lips move; she was gesticulating to the space she'd been waiting for. Her lips moved some more.

I can't read lips, and that's the point I which I did become impatient. I unbuckled my belt and left the car, hoping we could speak like adults. However, she wouldn't roll down her window. All I could do is say, almost at a shout, “I'm just waiting, like you. What's your problem? There's no problem.” Felt altogether impotent and silly. I returned to my car.

Clearly, I had not made a full return from the mountain top. I was not ready to deal with other people. It's well and good to be courteous to people in your faith community, people you've come to know and care for. But the real test is how you treat the stranger.

I'm not sure I earned a passing grade as I confronted that woman in the grocery store parking lot. I went home, so my cat could teach me greater humility.

There's nothing to stop a man from writing unless that man stops himself. If a man truly desires to write, then he will. Rejection and ridicule will only strengthen him. And the longer he is held back the stronger he will become, like a mass of rising water against a dam. There is no losing in writing; it will make your toes laugh as you sleep; it will make you stride like a tiger; it will fire the eye and put you face to face with Death. You will die a fighter, you will be honored in hell. The luck of the word. Go with it, send it. Be the Clown in the Darkness. It's funny. It's funny. One more new line ...
— from The Captain is Out to Lunch and the Sailors Have Taken Over the Ship

Humans think they are smarter than dolphins because we build cars and buildings and start wars, etc., and all that dolphins do is swim in the water, eat fish, and play around. Dolphins believe that they are smarter for exactly the same reasons.
— Douglas Adams

Conceive of Nothing While you live And I give you Heaven.
— Jack Kerouac
Happy Birthday, Ti Jean

What is wanted now is not simply the Christian who takes an inner complacency in the words & example of Christ, but who seek to follow Christ perfectly, not only in his personal life, not only in prayer & penitence, but also in his political commitments and in all social responsibilities.
— Thomas Merton