You lose it if you talk about it. – Ernest Hemingway

This idea began with Tibetan Prayer Flags. One of the hidden benefits to subscribing to a magazine is your information is typically sold to what I call "the sucker list". One may write the magazine and request that your name and address not be sold to any lists, but many people don't know that. I suspect I got on the sucker list for people who are interested in Buddhism because I subscribe to Shambhala Sun. Or, I got on the sucker list because I ordered a Tibetan singing bowl.

Sure, it makes sense, in a way. If I'm interested enough in Buddhism to subscribe to this magazine, I might be interested in other magazines, products, or issues associated with Buddhism. In a perverse way, it's comforting to be aware that there are as many tchotchkes being offered to Buddhists as there are to Christians. Some of those trinkets are of questionable taste, or (at least) are the definition of "conspicuous consumption". A $500 Buddha head - almost as big as one of the statues destroyed by the Taliban in Afghanistan - for your garden?

The Prayer Flags were included with an appeal to support the International Campaign for Tibet. A blurb in
the letter mentioned that, in Tibetan Buddhist tradition, practitioners believe that prayers invoked with these flags would be carried on the wind.

I liked the idea of prayers being carried on the wind. Where some
Rev Gals might say "That'll Preach", I thought: "There's a poem in that." 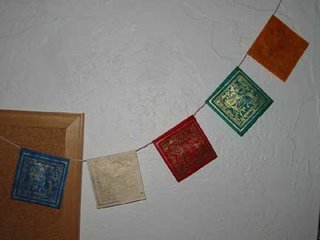 Prayer Flags shown stretched between a bulletin board and my window, behind my desk. The flags are above a vent, and are flapping as I type.

These flags are about an inch square. There are five flags, one color each - blue, ivory, red, green and gold. I suspect those colors have some significance, but I don't know what it is.

But - just to demonstrate how my mind leaps around - those colors reminded me of Cheyenne cosmology. As I related last year, in the Cheyenne system, they observe what we might call "cross-quarter" directions. And each direction is associated with a different color and time of life, thus:

So, the idea is to combine the image of prayer being carried on the wind with these colors and seasons of life (the directions also relate to Spring, Summer, Fall, and Winter, in that order).

Hopefully, I haven't built this scheme up to much in my imagination. The bigger an idea for a poem gets in my "vision", the more likely the
thing won't get written (or, at least, completed).

Here's what I have so far: